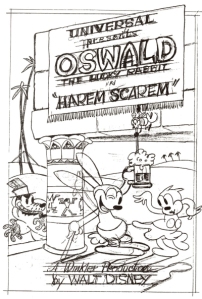 On January 9, 1928, the Oswald the Lucky Rabbit short film Harem Scarem premiered in theaters. The short was animated by Hugh Harman and Rollin Hamilton. Since its release, it has since become classified as a lost film; in 2012, however, several drawings from the short were found to exist, and were compiled by the Disney Archives to create a special 90-second short film to honor the character’s 85th birthday, and was screened for D23 members at a private event.