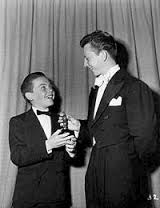 “[The award] goes to the little boy whose performance in The Window and So Dear to My Heart enchanted movie-goers and critics alike, Bobby Driscoll.” – Presenter Donald O’Connor

On March 23, 1950, the 22nd Academy Awards were held at the Royal Pantages Theater in Hollywood, California. For his work in the Disney film So Dear to My Heart, as well as the RKO film The Window, Bobby Driscoll was awarded with the Academy Juvenile Award as the best juvenile actor of 1949. So Dear to My Heart was Driscoll’s second film for the Disney Studios, and he had received several positive reviews for his role as Jeremiah Kincaid. He was the ninth recipient of the award, joining actors such as Mickey Rooney and Shirley Temple.