February 11, 1932 – The Mickey Mouse Short Film The Grocery Boy is Released to Theaters 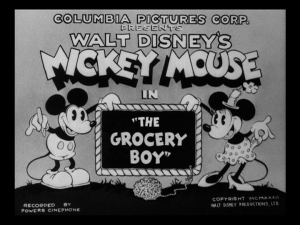 On February 11, 1932, the Mickey Mouse short film The Grocery Boy was released to theaters. It was directed by Wilfred Jackson.

Mickey is busy in his grocery store weighing potatoes. Once he completes the task, he tries to unload them, but spills them all over the floor. The phone rings, and he trips over himself to answer it. Minnie is calling, but she is in a foul mood, asking tersely if he would please hurry with her groceries; secretly, she can’t wait to see her sweetheart. Mickey rushes to her house and delivers her groceries with a smile. Mickey says hello, but Minnie tells him goodbye, quite obviously playing hard-to-get. When Mickey angrily tries to leave, he accidentally opens a closet where the ironing board falls out, and the iron falls on Mickey’s head. Minnie drops her ruse and tends to Mickey, but soon has to tend to the turkey in the oven. Mickey musically assists Minnie in preparing the food, with the dishes joining in the melody. Meanwhile, Pluto has also noticed the turkey in the oven, and runs off with it, with Mickey chasing after him around the house. Minnie finally catches the dog and tries to wrestle the turkey away, with little success. Minnie also tries to save the cake they baked, but that crashes on Mickey’s head.