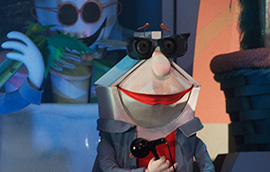 “We must conclude, you depend on food. So we just repeat, you are what you eat.”

On March 26, 1994, the audio-animatronic show Food Rocks opened in The Land pavilion in Walt Disney World’s Epcot. It was sponsored by Nestlé foods. It replaced the former show Kitchen Kabaret, and like its predecessor, taught guests about the importance of proper nutrition. The show featured several songs which were parodies of songs from popular culture, including Aretha Franklin’s “Respect” (becoming “Just a Little Bit” by the Get-the-Point Sisters) and Peter Gabriel’s “Sledgehammer” (becoming “High Fiber” by Pita Gabriel). The show was presented as a benefit concert, which was constantly interrupted by the junk food heavy metal band The Excess. The show became a cult favorite among guests, but eventually was closed on January 3, 2004 to be replaced by the popular attraction Soarin’.