On March 12, 2000, the live-action television film Model Behavior premiered on ABC’s Wonderful World of Disney programming block. The movie was based on the book Janine & Alex, Alex & Janine by Michael Levin, who helped to co-write the film with David Kukoff and Matt Roshkow. The film was directed by Mark Rosman, and starred Maggie Lawson as Alex Burroughs/Janine Adams, Justin Timberlake as Jason Sharpe, Jesse Nilsson as Eric Singer, Daniel Clark as Josh, Karen Hines as Monique, and Kathy Lee Gifford as Deirdre Adams.

Shy teenager Alex Burroughs is attending a party on a mission: to ask popular athlete Eric Singer to the Fall Ball. Her best friend Sharon is there for moral support, although Alex has taken to hiding in the bathroom. Alex finally leaves the bathroom and runs into Eric, but the encounter is rather awkward, and she soon leaves the party to head home, embarrassed. Her father lectures her on breaking curfew, but she doesn’t seem to care. Before she goes to sleep, she reads her fashion magazines once again, wishing she were the model on the cover. Meanwhile, the model on the cover, Janine Adams, is trying to order Chinese food, but her mother nixes the order and changes it to her usual “steamed broccoli and brown rice.” Janine thinks her mother is overbearing, and wishes she could just be a normal teenage girl. She watches television in her room and comes across a program about herself, including an “exclusive” about her being involved with fellow model Jason Sharpe, although in reality Janine wants nothing to do with him. 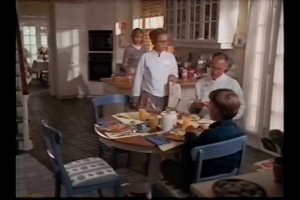 Alex tries to talk to her father about her ideas for new catering uniforms, showing a glimpse of her unsatisfactory life

The next morning, Alex gets ready for an event for her father’s catering company, and finds out that she’s a finalist to get into a summer program for fashion and design, with an interview occurring in two weeks. Janine is preparing for her day, snapping at everyone and everything around her, including her assistant Monique. Janine has to go to a launch for her book, which Alex’s dad’s company is catering. At the party, Janine and Alex run into each other, and Janine takes Alex into the bathroom to show that the two look uncannily alike. Janine starts questioning Alex about normal life, and then offers to have Alex trade places with her, just for a week. Alex is unsure, but finally agrees. The two quickly change outfits and head back to the party in their new roles. Janine is excited to head home and begin a “normal” life, while Alex is thrilled to live the life of a supermodel.

Alex’s family and Janine’s assistant Monique are confused at the girls’ behavior, but they run with it. Janine heads to Alex’s school, and is unusually excited about the experience. She runs into Alex’s friend Sharon and starts walking the hallways. Janine confidently says hello to the cutest guys in school, but Sharon reminds her that they don’t exist on the social radar. Janine refuses to accept this, and also refuses to take the abuse from popular mean girl Mindy. Alex then attends a photo shoot in a bikini, and is noticeably uncomfortable in front of the camera. Although the photographer is annoyed at first, he is soon taken with her “new” shy look. Back at school, Janine talks back to the teacher, earning the respect from several of her fellow students. Alex walks the streets after her shoot, and runs into Jason Sharpe, who apologizes for the recent article calling them a couple. He promises to make it up to her, and quickly leaves. Monique tells Alex that she should want nothing to do with him, but Alex tells Janine that, just for this week, she’ll reconsider. Janine finds some eye candy of her own in the form of Eric Singer, and decides to approach him, although Mindy is hanging all over him. She pours Eric’s carton of milk all over Mindy, and certainly catches Eric’s attention before heading back to her table.

Alex surprises everyone by giving her chauffeur Tony the day off, and spending the day seeing the city with Monique

Alex decides to go see the sights of New York, and gives her chauffeur the day off. Janine cooks breakfast for her family, and shows a real talent for cooking, although Alex’s brother Josh is suspicious of “Alex’s” new behavior. Alex and Monique go rollerblading through Central Park, and Alex hears about Janine’s habit of talking down to the people around her. Alex decides to be kind to those around her instead, and decides to take Monique shopping. At school, “Alex’s” social standing has improved substantially thanks to Janine, and Eric starts talking to her, although she acts nonchalant about it. In New York, Alex is asked out on a date by Jason. She wants to accept, but the night he proposes is the night that Alex and Janine are supposed to switch back. Janine soon calls Alex, and the two agree to postpone the switch back for another week. Josh overhears the conversation, and realizes that he’s got a huge scandal on his hands. Although Alex is warned to stay away from Jason Sharpe, she ignores Janine’s advice and goes on a date with Jason. Janine then goes on a date with Eric, although she is less than impressed with his car. Eric plans on taking Janine to Les Gourmand, a fancy French restaurant, which is where Alex and Jason are also going.

Alex and Jason show up at the restaurant amid a sea of reporters, although the reporters ignore Janine when she shows up with Eric. After finding out that the restaurant lost Eric’s reservation, they leave, but Eric decides to take her around the back. Alex and Jason start to bond, especially when Jason admits that he’s only modeling to save up money for grad school so he can study astronomy. He invites Alex to see a meteor shower later that night, and she accepts. Josh sneaks into the restaurant to film the evidence of the two girls. Meanwhile, Eric is more and more impressed with how Janine handles herself. Janine and Alex excuse themselves to the bathroom, and, unaware that the mirror is actually gone, think the other is their mirror reflection. They finally realize that they are at the same restaurant, and Janine is angry to the point where she tries to break up the date between Alex and Jason, while Alex tries to break up Eric and Janine. The two then switch back, although they both have a lot of explaining to do. Eric then takes Janine go-karting, and they have a much better, more normal evening; Jason takes Alex to see the meteor shower, and the two share a kiss. After Eric takes Janine home, she admits that this is the most fun she’d had in a long time, and he calls her his girl before he kisses her.

Janine arrives home from her date with Eric, unaware of how much trouble she’s in

When Janine gets home, Alex’s father reminds her that she missed the wedding event she was supposed to cater, and is grounded. Alex arrives home to find Janine’s mother waiting for her. Alex then wakes up for an early morning workout the next morning, while Janine gets in trouble for using her cell phone in class, among other things, and is sentenced to do the laundry for the school. Alex then has to walk in a show, although she doesn’t do very well, as she has never walked a runway before, and rips the dress before running into another model. At school, Janine snaps at Sharon, and arrives home to find the admissions adviser for the summer program Alex wants waiting for her. Not knowing where Alex’s portfolio is, she creates a mishmash of pictures and scribbles, and Alex is not accepted into the program. Back at Janine’s, Josh shows up to blackmail Alex. Josh then gives her the idea of telling Jason who she really is, and asking him to the fall ball, and calls him to meet her that night. Janine tries to sneak out of the house to meet Eric, but gets caught and is sent back to her room by Alex’s father. Alex shows up at the high school to meet Jason, and before she can ask, he tells her that he’s heading to Paris and wants her to go with him. As Alex ties up her hair and puts on her glasses, she gives Jason the tape and asks him to kiss her. Eric spots them, and the two guys think that she’s been two-timing them.

When Janine and Alex speak on the phone, the two yell at each other for ruining each other’s careers, and decide that they need to switch back right away, and plan it for the next morning in front of the school. The two have a tearful goodbye, and sadly return to their lives. Janine starts snapping at everyone and everything again, and Monique sadly states that Janine was so different the past week. Alex’s parents are surprised at how different Alex is, as her attitude has done a complete 180. At Janine’s photo shoot, the photographer wants her to be shy and coquettish as Alex was, and Janine is frustrated that she can’t do it. While doing through her bag, she finds the pictures of her and Eric, and gets an idea. Alex resumes life at school, although it seems that everything is now worse after Janine’s stint. Suddenly, she gets an idea, and smiles. At the apartment, Janine refuses to go to her agent’s party, instead choosing to go to the Fall Ball. Alex plans to go get Jason, and actually gets brother’s help for once. She calls Jason, but it appears that he’s already left for Paris.

Janine tries to explain everything to Eric at the Fall Ball, but he is soon pulled away by Mindy

Janine pulls up to the Fall Ball, pretending to be Alex, and looks for Eric. Although she tries to talk to Eric, Mindy pulls Eric away and insults her. Alex then shows up to the dance, although her parents soon discover that she has snuck out. The Prince and Princess of the Fall Ball are announced, and it’s Eric and Mindy, which crushes Janine. As Eric and Mindy dance together, Janine watches on sadly. Meanwhile, Alex and Janine’s families show up at the dance, and Alex is surprised to see Jason show up at the dance. As Alex walks to Jason, and Janine walks to Eric, the two girls collide and everyone is surprised to see the two of them. When their families walk in, the two finally explain the entire situation. Their parents finally start listening to them, making them both very happy. Alex wishes Jason goodbye, but Jason refuses to let her go, and asks her to dance. Eric then goes over to Janine and asks her to dance. The dance continues, and everyone is happy, including Monique and Alex’s chauffeur, who pair up as well.