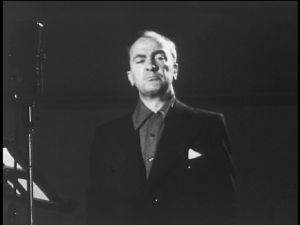 “So what the hell, I did it, and I recorded this thing for Walt [Disney], as the Big Bad Wolf. That put me in pretty solid with Walt.”

On September 24, 1894, William Bletcher was born in Lancaster, Pennsylvania. His career began with silent comedies, and he moved on to two-reel Hal Roach comedies in the 1930s. During the ’30s and ’40s, Bletcher was well known for voicing villains for cartoons, being blessed with a deep, rich voice despite his appearance, as he only stood a five feet two inches. His friend Pinto Colvig (best known as the voice of Goofy) recommended that Bletcher try out for a new cartoon Disney was making called Three Little Pigs, and Bletcher won the role of the Big Bad Wolf, which was his first work with cartoons. Bletcher would continue to voice the Wolf in the two sequels, and provided the voice of Pegleg Pete in several shorts, as well as any bit parts that they needed. Bletcher also provided voice work for Warner Brothers, and in the 1950s, he voiced the Lone Ranger in the Lone Ranger radio program. Bletcher passed away on January 5, 1979 in Los Angeles at the age of 84.