June 24, 2008 – The Soundtrack to the Pixar Animated Film Wall-E is Released Through Walt Disney Records 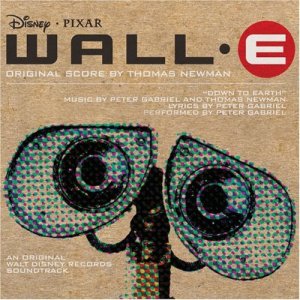 “We’re coming down to the ground, we hear the birds sing in the trees, and the land will be looked after, we send the seeds out in the breeze.”

On June 24, 2008, the soundtrack to Pixar’s ninth animated feature film Wall-E was released through Walt Disney Records. Composed by Thomas Newman, this is Newman’s second collaboration with Pixar, his first being Finding Nemo. Included in the soundtrack is the original song for the film “Down to Earth,” written and performed by Peter Gabriel, “La vie en Rose” performed by Louis Armstrong, and two excerpts from the musical film Hello, Dolly!: “Put On Your Sunday Clothes” and “It Only Takes a Moment,” both sung by Michael Crawford. The soundtrack won two Grammy Awards for Best Original Song (“Down to Earth”) and Best Instrumental Arrangement for the piece “Define Dancing,” and was nominated for Best Motion Picture Score, but lost to The Dark Knight by James Newton Howard and Hans Zimmer. The soundtrack was also nominated for two Academy Awards for Best Original Music Score and Best Original Song, both losing to Slumdog Millionaire.