March 30, 1945 – The Donald Duck Short Film The Eyes Have It is Released to Theaters 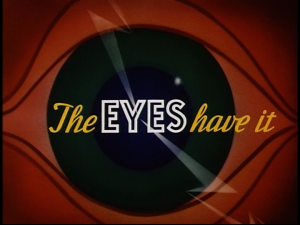 On March 30, 1945, the Donald Duck short film The Eyes Have It premiered in theaters. It was directed by Jack Hannah, with story by Bill Berg and Ralph Wright.

Donald receives a hypnotism kit, opens the book of instructions. The first step is to find a subject of low intelligence. Donald looks around to see Pluto sleeping nearby and calls the dog over. Donald pretends to be friendly, but quickly slips on the hypnotism goggles and makes Pluto think he’s a mouse. Pluto begins to scamper around the house like a mouse, and Donald calls out like a cat, making Pluto scamper into a mouse hole for safety. Donald then finds Pluto eating some cheese left out on the counter. 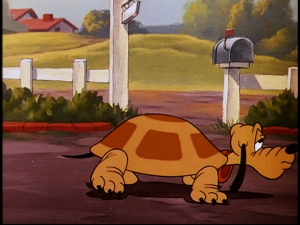 Pluto turns into a turtle thanks to Donald’s hypnotism

The next animal Donald hypnotizes Pluto into is a turtle, and he walks slowly across the front yard, with a worm passing him in speed. Donald then decides to make Pluto a chicken, and Pluto runs after the worm he’d just seen, and starting pecking at it. He tears up Donald’s flower garden and is chased into the hen house. The rooster, angered by the squawking by the hens, goes in an grabs Pluto painfully by the tail. Donald, excited by the fight, gets a wicked idea to turn Pluto into a lion. Pluto chases the rooster around the hen house, and as they burst out the hen house door, they bump into Donald, who falls and breaks his hypnotic goggles.

The rooster grabs Donald’s head for dear life, and “lion” Pluto turns his attentions to the duck. Donald tries to protect himself using the furniture, and wonders how he’s going to break the hypnosis. Donald and Pluto break through the ceiling of the house during the pursuit, and fall to the ground heavily. Due to the fall, Pluto’s hypnosis is broken, and he licks Donald’s face in an attempt to wake the duck up. Donald, seeing Pluto’s smile, thinks he’s baring his teeth, and flees, leaving a very confused Pluto.