On August 30, 1946, the Donald Duck short Dumb Bell of the Yukon was released in theaters. The short was directed by Jack King, with story by Harry Reeves and Homer Brightman, and Donald Duck voiced by Clarence Nash.

Donald is walking through the snow of the Yukon, reading a postcard from Daisy. She lets him know that she really wants a fur coat, and he searches for a bear to trap. Hearing the sounds of snoring from a nearby cave, he peeks in to see a mother bear snoozing with her cub resting on her stomach. Seeing the cub as the perfect specimen to turn into a fur coat, Donald lures the cub out with the “essence of honey.” Unfortunately, just as he traps the bear, the mother begins searching for her cub in her sleep, grabbing Donald instead. 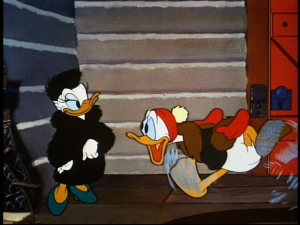 Donald is so distracted with the idea of pleasing Daisy, he imagines that the bear cub is her in a new fur coat

Donald carefully sneaks away, using a rock in the place of the cub, and takes the cub back to his cabin. The cub gives Donald a smile, but Donald is too distracted with the idea of Daisy in a fur coat. He decides that the best way of killing the bear for its fur is to hang it, but the plan goes awry, with Donald getting caught in the noose instead. Meanwhile, back in the cave, the mother wakes up and notices tracks leading to Donald’s cabin. She breaks down the door and searches for her cub.

Donald, who has been chasing the cub around the cabin, thinks he’s caught the cub by the foot, when he’s actually been dragging around the mother bear, who is ready to attack. When the mother chases after Donald, Donald disguises himself as the cub, only to be popped out of his costume when the mother hugs him just a little too tightly. He manages to sneak back in, but at this point, the mother has become suspicious. The real cub sneaks back into the cabin, revealing Donald’s ruse and kicking him into the cupboard, where a jar of honey falls and lands on Donald’s head. The short ends with mother and baby licking the honey off of Donald, much to his chagrin.