On April 23, 1923, Alice Comedies actress Virginia Davis’ parents signed a contract with the fledgling Laugh-O-gram Films, owned by Walt Disney, providing the family 5% of receipts from showings of the film Alice’s Wonderland. Davis starred as Alice, a little girl who finds herself in a cartoon world. Unfortunately, this film was never released, as Laugh-O-gram Films went bankrupt; after Walt moved to California, he was able to sell the series to Margaret Winkler based on the film, and Walt was able to convince the Davis family to join him in Los Angeles to create more Alice films, starring Virginia. Davis accepted Walt’s offer in October, and the first Alice film, Alice’s Day at Sea, was released on March 1, 1924. 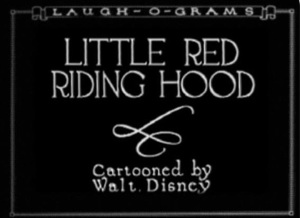 On July 29, 1922, the Laugh-o-Gram short film Little Red Riding Hood premiered in theaters. Though Walt Disney had had success with the Newman Laugh-O-grams in the early 1920s, this new short film was his first foray into the animation business among the likes of the New York studios. Though this short film would start a string of adapted fairy tale cartoons, this venture would fail until Disney created the Alice Comedies. The film was considered a lost film for decades, but a print was found in the 1990s in a London film library; the short was eventually restored by the Walt Disney Company when they acquired it in 1998.

“Don’t let me catch you around here again.”

On November 3, 1922, the Laugh-o-Gram Puss in Boots was released. It was based on the classic fairy-tale of the same name, but updated for a then-modern audience. It was directed by Walt Disney.

Once upon a time, a boy and his cat Puss were walking down the street, with the boy bringing his sweetheart, the princess, a bouquet of flowers. Puss, in turn, flirts with her cat. While both pairs are occupied, the king comes out and boots the boy away from his daughter. He chases the boy around the garden and warns him never to return before throwing him and Puss out. The boy walks away dejected, moaning to the Puss that the king doesn’t like him. Puss, wanting to impress her mate, asks the boy to buy her a pair of boots, but the boy refuses and heads to the cinema instead. They watch a “Rodolph Vaselino” film about a matador, which gives Puss an idea on how to win the king’s favor – but he has to buy her the flapper boots first. The king is excited about the upcoming bull fight, where the boy will be fighting to win the princess’ hand. The boy enters the arena, but runs around terrified of the bull. After catching the princess’ eye, he summons his courage and manages to fight the bull, but has to call Puss for assistance. With Puss’ help, they knock the bull out, and the king allows the boy to marry his daughter.

“Cinderella, whose only friend was a cat.”

On December 6, 1922, the Laugh-O-Gram Film Cinderella was released. This was a silent film from Walt Disney’s early Laugh-O-Gram Studio, founded in May 1922. Cinderella was one of the six fairy tale cartoons produced during the studio’s contract with Pictorial Clubs, Inc. The short is a modern-day (of the time) take on the classic fairy tale.

The opening of the short introduces Cinderella and her only friend, the cat; her two stepsisters; and the prince, who chases a bear with a shotgun. A group of bears is seen dancing, playing music, and being merry, until they see the prince, who chases them all into their cave. The prince victoriously captures all the bears and drags them out in a row, their feet tied to a single rope. The prince then sends out invitations to a ball, and his trusty servant dog takes them to every home in the kingdom.

Once the two set their eyes on each other, they dance the night away

At the ball, the prince is dancing with one of the stepsisters when he spies Cinderella, and it is love at first sight between the two. Everyone wonders who the girl is. Meanwhile, Cinderella’s cat is busy dancing with the prince’s dog. As the guests start to rush for the food, Cinderella and the prince spend time together alone in the garden. Cinderella suddenly notices that it’s five minutes to midnight, and dashes out of the ball, losing her shoe in the process. As she runs home, her clothes soon change to rags.

The next day, the prince sets out to find her, following a set of footprints that unfortunately lead to a duck. He finally finds Cinderella’s house and has the stepsisters try on the shoe, but of course it doesn’t fit. Then he sees Cinderella, and realizes that she is the mystery girl from the ball. The prince and Cinderella, as well as the cat and the dog, live happily ever after.