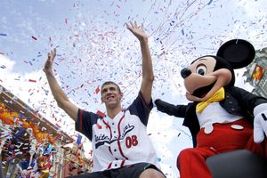 “To top it all off with a parade at Disney World is just incredible.”

On August 29, 2008, Olympic swimmer Michael Phelps celebrated his triumphant return from the Beijing Olympics by being featured in the “America’s Homecoming Parade” through Walt Disney World’s Magic Kingdom Park. Traveling in a red Corvette amongst red, white, and blue confetti, Phelps was joined by Mickey and Minnie Mouse.