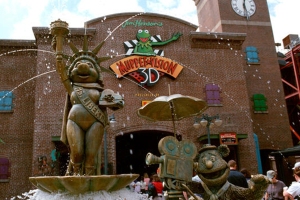 On April 3, 2016, the area surrounding the attraction Muppet*Vision 3D was renamed Muppets Courtyard, after a majority of the Streets of America area of the park was closed to make way for the Star Wars Land expansion. After the renaming of the area showed up in park maps, several additions were made to the area through the rest of 2016, including the opening of the Muppet-themed restaurant PizzeRizzo. This name was only temporary, however, as the area was folded into what is now known as the Grand Avenue.