November 15, 1928 – The Alice Comedy Alice Rattled by Rats is Released 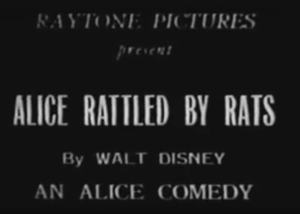 “Guard the house while I’m gone—“

On November 15, 1928, the Alice Comedy Alice Rattled by Rats was released to theaters. It was the 25th Alice Comedy released, and the tenth to feature second Alice actress Margie Gay.

The short film begins with Alice packing for a trip and telling Julius to guard the house while she’s gone. Julius waves goodbye and prepares for his duties to guard Alice’s house. As he patrols the house, a couple of rats start causing mischief. Julius tries to shoot the rat, only his gun isn’t working, so he then chases the rat into the house. Julius ends up falling into a barrel of home brewed liquor, and ends up falling down drunk. The rats have taken over the house at this point, playing the piano and dancing into a frenzy. The rats then use household items to create other musical instruments, and use the shower to create a waterslide. Julius is still walking around drunk, unable to stop himself from being abused by the rats. Alice returns home, confused, and Julius finds himself thrown out of the house and into a cactus patch. Julius then tries to get the rats out via a bomb, only the bomb is thrown back at him and Alice, and explodes.