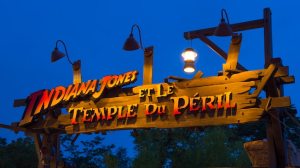 “Squeeze as much of the magic as possible into your stay by reducing the waiting time with a FASTPASS.”

On October 2, 1999, the first Disneyland Paris FastPass was offered, for the attraction Indiana Jones et le Temple de Péril. This addition to the park was created to help guests streamline their experience; guests would pick up a pass for a popular attraction, which would give them a set time to come back and bypass the lengthier queues. It was originally tested and offered in Disney’s Animal Kingdom in July of the same year, and was later offered in Disneyland for the it’s a small world attraction on November 19.