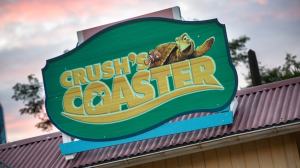 “Spin, dive and fight against the current as you get swept up in a whirlpool of adventure.”

On June 9, 2007, the attraction Crush’s Coaster opened in the Toon Studio area of Disneyland Paris. Based on the Pixar film Finding Nemo, guests board a turtle shell before diving into the ocean and reliving the best parts of the film, including the journey through the East Australian Current. Guests also have the opportunity to play a game on their phones while waiting in the queue, where they must catch starfish and avoid obstacles.