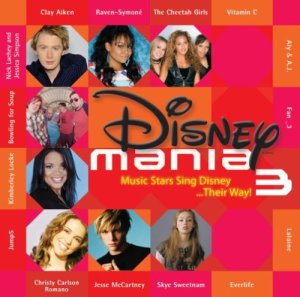 “Wherever I wander, wherever I roam, I couldn’t be fonder of my big home.”

On February 15, 2005, the third album in the Disney cover compilation series Disneymania was released through Walt Disney Records. The album featured a variety of artists, ranging from Disney Channel stars The Cheetah Girls and Christy Carlson Romano, to American Idol stars Clay Aiken and Kimberley Locke, to bands Bowling for Soup and Jump5. Five singles were released to promote the album and Disney animated features released on home video: “Under the Sea” by Raven-Symone, “A Whole New World” by Jessica Simpson and Nick Lachey, “I Won’t Say (I’m in Love)” by The Cheetah Girls, “Zip-A-Dee-Doo-Dah” by Aly & AJ, “Cruella De Vil” by Lalaine, and “Hawaiian Roller Coaster Ride” by Jump5. The album peaked at 30 on the Billboard 200, and was eventually certified Gold by the RIAA.