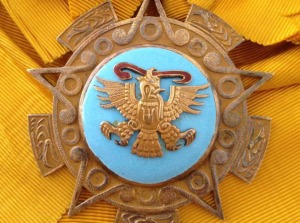 On August 30, 1943, Walt Disney, along with MGM Studios co-founder Louis B. Mayer, was awarded the Order of the Aztec Eagle, Mexico’s highest honor. Disney received the award from Mexican president Manuel Ávila Camacho, honoring Disney’s efforts to create a strong relationship with Mexico through the Good Neighbor Program. Through this program, Walt and a group of animators, known as “El Grupo,” traveled through South America to research the countries and create animated features and short films. One such output was the film The Three Caballeros, which featured Mexican rooster Panchito as a lead character. This film was the beginning of a long relationship the Disney Studios had with Mexico.