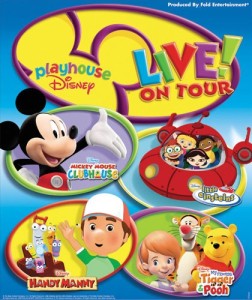 On August 25, 2007, the live show Playhouse Disney Live! On Tour premiered in Lakeland, Florida. This show featured characters from popular Playhouse Disney shows, including Handy Manny, Little Einsteins, My Friends Tigger & Pooh, and Mickey Mouse Clubhouse. The main plot of the show is that Mickey is planning a party for all of his friends, with characters such as Handy Manny and Winnie the Pooh helping in the planning. Once it finished its run, the show was followed by Three Classic Fairy Tales.