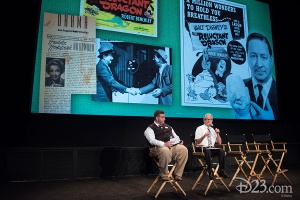 “It was definitely a Disney day to remember, proving you’ll never know what surprises will await at a D23 event.”

On August 20, 2016, the Disney fanclub D23 held an official event to celebrate the 75th anniversary of the little-known Disney film The Reluctant Dragon. The film, released in 1941, starred Robert Benchley as himself trying to pitch the titular story at the Walt Disney Studios, and ultimately takes a tour around several areas while trying to find Walt; this gave viewers a chance to see how an animated film gets made, thanks to tours around the Ink and Paint Department and the Sound Effects stage. Almost 400 D23 members were present at the Walt Disney Studios for a viewing of the film, and were able to see several artifacts from the Archives that were present in the film, including the bust of Robert Benchley. Also present for the event were members of the Walt Disney Archives, including director Becky Cline; voice actors Bill Farmer (Goofy) and Bret Iwan (Mickey Mouse); Animation Research Library manager Fox Carney; film producer and director Ted Thomas; Disney historian Les Perkins; Imagineer Tony Baxter; and Steve Vagnini from D23. There were special events on the lot after the screening and presentations, along with autograph sessions with several of the Disney Legends in attendance.