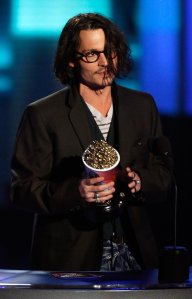 “This is the man who did it all right here, Johnny Depp. Without him, we wouldn’t be here.” – Producer Jerry Bruckheimer

On June 3, 2007, the 2007 MTV Movie Awards were held at the Gibson Amphitheatre in Universal City, California. The Disney live-action feature Pirates of the Caribbean: Dead Man’s Chest scored two awards at the ceremony, including Best Movie; it beat out other blockbusters 300, Blades of Glory, Borat, and Little Miss Sunshine. Johnny Depp was also awarded Best Performance for his role as Captain Jack Sparrow in the film, beating the likes of Beyonce for Dreamgirls and Gerard Butler for 300.