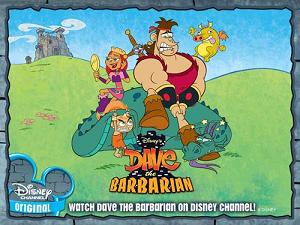 “They aren’t the greatest heroes, but they’re the only ones we’ve got.”

On January 23, 2004, the animated series Dave the Barbarian premiered on the Disney Channel. The series was about siblings Dave, Candy, and Fang, who are left to protect the kingdom of Udrogoth while their parents are away fighting evil; the siblings, however, leave much to be desired. The series ran for one season with 21 episodes, with its last episode airing on January 22, 2005. It was created by Doug Langdale, and starred Danny Cooksey as Dave, Erica Luttrell as Candy, Tress MacNeille as Fang, Kevin Michael Richardson as Uncle Oswidge, Jeff Bennett as the Narrator, Estelle Harris as Lula the Magic Sword, Frank Welker as Faffy, and Paul Rugg as The Dark Lord Chuckles and the Silly Piggy.