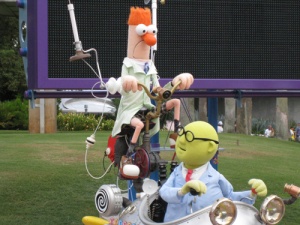 “Now, before we continue this conversation, let me just activate the Hob Knob.”

On August 21, 2007, almost six months after its California debut, the interactive audio-animatronic Muppet Mobile Lab made its debut in Walt Disney World’s Epcot park. Featuring the characters Dr. Bunsen Honeydew and assistant Beaker, the audio-animatronic went around the park freely, interacting with guests as they entertained the crowd with their best Muppet jokes and puns. The new feature was part of a test-run by the Disney Imagineers to create more characters that could interact with the guests as they mill about the various parks.