August 1, 1924 – The Alice Comedy Alice the Peacemaker is Released to Theaters 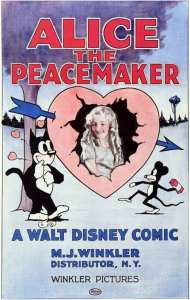 On August 1, 1924, the seventh Alice Comedy, entitled Alice the Peacemaker, premiered in theaters. The film featured Virginia Davis as Alice. While not considered a lost film, the short has not been released through the Disney Studios for home viewing; it has, however, been shown at the San Francisco Silent Film Festival, with the original print kept in protective storage in the Disney Archives.