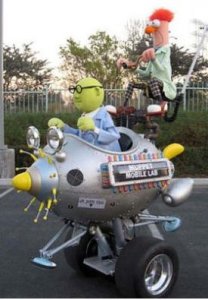 “Would you like to help run a battery of tests on all these people?”

On February 27, 2007, the audio-animatronic attraction Muppet Mobile Lab had its first test in front of the public at Disney’s California Adventure. Similar to Push the Talking Trash Can, the audio-animatronic “mobile lab” featuring Muppet characters Dr. Bunsen Honeydew and Beaker travel around the park, interacting with guests with the use of special features. Muppet performer Dave Goelz, who created the character of Bunsen, was brought to Glendale to assist with the project, making sure that the Imagineers portrayed the characters correctly. The figure was also tested in Walt Disney World and Hong Kong Disneyland.