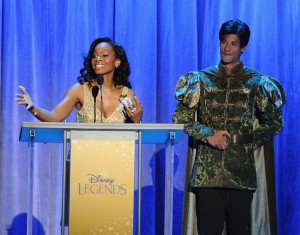 “I always dreamed of being a voice in a Disney movie…I feel like what an honor that this is how the dream comes true, bigger and stronger than I had even imagined it.”

On September 6, 1972, Anika Noni Rose was born in Bloomfield, Connecticut. After graduating from Florida A&M University with a degree in theater, she moved to San Francisco to study at the American Conservatory Theater. After this, Rose moved to New York, where she landed a role in the Broadway production of Footloose, playing the character Rusty. Her big break, however, came with the musical Caroline, or Change, playing the role of Emmie Thibodeaux, and winning the Tony Award for Best Performance by a Featured Actress in a Musical. Rose also starred in a string of films, with her best known role being the character Lorrell in Dreamgirls; for this role, she was awarded several nominations. In 2009, she won the coveted role of Tiana in the Disney animated feature The Princess and the Frog. She continues to work in television, film, and theater, including a Broadway production of A Raisin in the Sun in 2014, and continues to voice the character of Tiana in special Disney projects. In 2011, Rose was named a Disney Legend for her work as Tiana.