January 4, 1943 – The Educational Propaganda Short Film The Grain That Built a Hemisphere is Delivered 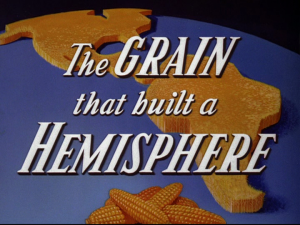 “Corn is the symbol of a spirit that links the Americas in a common bond of union and solidarity.”

On January 4, 1943, the educational short film The Grain That Built a Hemisphere was delivered to the Coordinator of Inter-American Affairs. It was nominated for an Academy Award for Best Documentary in 1943, but lost to The Battle of Midway, Kokoda Front Line!, Moscow Strikes Back, and Prelude to War. This short also includes a short segment from the 1938 Silly Symphony Farmyard Symphony. The short was directed by Bill Roberts.

The short begins with an explanation of corn, and how it possibly came to be. The earliest version of corn grew on the mountains centuries ago, but was not noticed by hunters as they searched for food. When hunters were unable to find game, they were able to find corn and use it for food; this discovery is then credited as helping begin the civilization of the Americas. The narrator then directs the attention to the Mayan civilization, which was built around the growth and worship of corn, with great temples built in dedication to the corn gods, including Yum Kaax. The Aztecs also built a civilization based on corn, with their corn goddess named Centeotl. The Incas, located in the Andes, worshipped a sun god, who provided them with all they needed to grow their corn. The crop of corn spread around South America and all the way to Canada; it was also sent over the world through the conquistadors and spread from there.

A list of foods made from corn is shown through animation

The narrator lists the various foods made from corn, including tortillas, succotash, and bourbon. Brought to present day, where it is explained that, thanks to advances in machinery, we can harvest enough corn in fifteen hours, compared to the 500 the Mayans needed. The next topic is how to inbreed corn, and the entire process is explained step by step. It produces small versions of the corn plant, but once two small unrelated inbred plants are cross-bred, that produces a stronger, larger stalk with more ears. Seventy-five percent of all corn produced in the United States goes to feed for livestock, with hogs eating the most of that percentage. After this, a scientific study of corn is presented, with an explanation of how the two parts of the corn kernel (the endosperm and the germ) are used to create oils and starches, which have a variety of uses. A hypothesis of how corn can be used to help the war effort is also presented, with the idea that corn can be used to create tough plastics, powerful fuels and explosives, tires, parachute fabrics, and more.