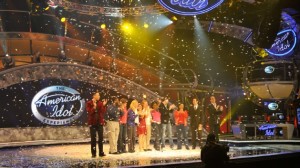 “Could you be the next American Idol? Be a part of this exciting daily competition to find a rising star!”

On February 14, 2009, the Walt Disney World attraction “The American Idol Experience” opened in Disney’s Hollywood Studios. Based on the popular reality television show, the attraction puts guests 14 years of age and older in an actual audition, beginning with singing a song a capella in front of the judges. Guests who move to the second audition sing karaoke style to pop songs, classic standards, or Disney tracks. The attraction has five shows a day, with three guests performing in each show. The winners of each show compete in the final competition in front of a live audience, who votes for the performer they like the best. The final winner of the day is awarded a “Dream Ticket,” which allows the winner to bypass the line at an American Idol audition.