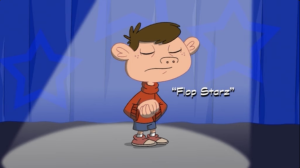 On February 1, 2008, the segment “Flop Starz” was used as the first officially airing episode of the popular animated television series Phineas and Ferb. The segment features an original song called “Gitchee, Gitchee, Goo,” written by the series co-founders Dan Povenmire and Jeff “Swampy” Marsh. The song impressed Disney enough to warrant a song for every episode afterward. “Flop Starz” was chosen to be the first episode by Disney executives, rather than the pilot episode, “Rollercoaster,” thanks to its grandiose atmosphere. The episode was broadcast on February 1 in every country that broadcasts Disney Channel, and garnered more than 23.5 million viewers worldwide. The episode received positive reviews, particularly for the song, which has been released on several Disney albums, including Disney Channel Playlist.

The episode begins with an ad for The Next Super American Pop Teen Idol Star!!, with auditions taking place at the mall in downtown Danville. Phineas and Ferb are eating breakfast while the ad is playing, when Candace runs into the kitchen, excited about the opportunity, and runs off to tell her best friend, Stacy. Phineas remarks that it would be best to have a one-hit wonder, a concept explained to him by his mother (who secretly had a one-hit wonder under the name “Lindana”). Phineas tells Ferb that he knows what they’re going to do today, and the two begin to work on becoming one-hit wonders. As Candace and Stacy prepare for Candace’s audition, the boys are hard at work coming up with meaningless lyrics for their song. 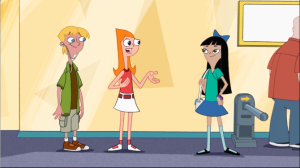 Candace (C) is joined by her friend Stacy and her crush Jeremy, while attempting to rid herself of a bout of stage fright

Meanwhile, Perry, the pet platypus, heads off to receive his mission. His nemesis, Dr. Doofenshmirtz, has apparently been buying construction toys “at an alarming rate.” Perry heads off to put a stop to Dr. Doofenshmirtz’s plans. At the mall, Candace heads to her audition, but is overwhelmed by stage fright. She then runs into her crush, Jeremy, who is only there to see a hot new band called “PFT,” and tells her that the 100th contestant will get to perform with them, live. Candace is announced as the 100th contestant, and is shocked to discover that “PFT” stands for “Phineas and the Ferb-Tones.” Phineas is also surprised to see his sister, and begins coaching her on their big single, “Gitchee, Gitchee, Goo.” Candace is shocked that her brothers have a hit single, and threatens to tell their mother.

Perry arrives at Dr. Doofenshmirtz’s lab just in time for him to activate his latest project: a giant robot that tramps through the Tri-State Area. Perry tries to deactivate the robot, but he is captured. Meanwhile, Phineas and Ferb are in the office of executives of Huge-O Records, but they remember what their mother said about being one-hit wonders, have a diva tantrum and storm out. They hear their song being played as elevator music, and realize the only thing they have left on their list is a reunion tour. The giant robot, fast approaching Huge-O Records after the boys leave, is about to smash into the building, when Perry uses pepper to make the robot sneeze himself and the Doctor out and through the executives’ office in Huge-O Records. Perry then uses the tape of PFT’s performance to save himself from plummeting to the ground, while Dr. Doofenshmirtz falls onto folding mattress that folds him up, followed by the giant robot stepping on him.

Phineas and Ferb plan their reunion concert, and Candace decides to sing with the group at their last performance. As Candace believes that this is her ticket to stardom, her hopes are dashed when Phineas announces that this would be the last time they ever perform their song and they immediately retire, leaving Candace alone in the dark.