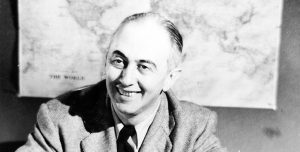 “When it comes to comic books published in France, Paul started it all.” – Roy E. Disney

On July 7, 1898, Paul Winker was born in Budapest, Hungary. After graduating from the University of Amsterdam, he moved to Paris, France, and opened a press agency called Opera Mundi; this agency sold articles to newspapers all across Western Europe. Eager to bring the popular Mickey Mouse to French audiences, Winkler was able to sell King Features comic strips to the French press, and developed the first French Mickey Mouse comic magazine, Le Journal de Mickey, in 1934. At its prime, the magazine boasted a circulation of 400,000. In 1940, after Paris was invaded by Nazi troops, Winkler and his family emigrated to New York, where he then opened the Press Alliance, which featured articles from the top writers of the era. Winkler also became a foreign political columnist for the Washington Post, and co-wrote anti-Nazi books with his wife, including Paris Underground, which became a film in 1945. After World War II ended, Winkler returned to France and moved back into Disney publishing ventures, including the comic book Hardi, Presente Donald in 1947, and the reissue of Le Journal de Mickey in 1952, which sold over 650,000 copies a week. Winkler passed away on September 23, 1982, in Melun, France. For his efforts in bringing Mickey Mouse comics to France, he was posthumously awarded as a Disney Legend in 1997.