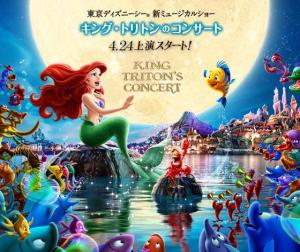 On April 24, 2015, the new musical show King Triton’s Concert opened in Tokyo DisneySea’s revamped Mermaid Lagoon Theater. Based on the hit animated feature The Little Mermaid, the musical show features an actress playing Ariel suspended on wires and “swimming” above the audience while singing with friends Sebastian and Flounder. The show is about 14 minutes long, and features a variety of special effects and puppetry.