September 24, 1936 – Creator of the Muppets and Disney Legend Jim Henson is Born

“One of the things Jim did, in that amazing career, was to really remake puppetry…and nobody had ever made that same transition with puppet theater.”- Jerry Juhl, Muppet head writer

On September 24, 1936, James Maury Henson was born in Greenville, Mississippi. In the late ’40s, the Henson family moved to Hyattsville, Maryland, and Henson later attended school at the University of Maryland. While attending college, he began working on a five-minute puppet show called Sam and Friends. “The magic of what television was is what first made me want to work in television, and puppetry was just a way of getting a job on a television station…television was in its early days,” Henson said about working in television at the time, “so I made a couple of puppets and auditioned, and got a job, and that’s kind of how it all started.” One of the characters on Sam and Friends would be the prototype for Henson’s most famous character, Kermit the Frog. The show had a huge following in the D.C. Metro area, and around this time, Henson began working with Jane Nebel, the woman who would eventually become his wife.

The success of Sam and Friends led to appearances of Henson’s Muppets on talk and variety shows, including The Jack Parr Show and The Ed Sullivan Show. The Muppets were also used for a variety of commercials, including a popular set of commercials for Wilkins Coffee in Washington D.C. In 1963, the Hensons moved to New York and set up Muppets, Inc., and Henson hired Jerry Juhl as a writer, and Frank Oz as a puppeteer. Oz would go on to create a close friendship and partnership with Henson, as seen in the pairings of Bert and Ernie, and Kermit and Fozzie. At this time, Henson created the character of Rowlf, an anthropomorphic dog that played the piano and appeared on The Jimmy Dean Show. “The exposure of Rowlf was pretty significant, I think,” Oz said. “It was the first real country-wide acceptance of one of Jim’s characters.” 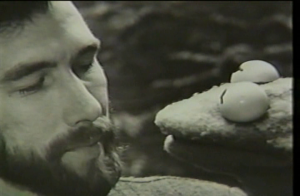 Henson and his alter-ego, Kermit

In 1969, Henson was asked by the team at the Children’s Television Workshop to work on a children’s program for public television. This would turn into the wildly successful show Sesame Street. Its success allowed Henson to get out of creating commercials. While working on Sesame Street, Henson and his team continued to develop sketches for adults, as the company did not want to be typecast as a creator of only children’s entertainment. One of the projects developed was a weekly show that was rejected by American networks, who only saw it as more children’s television. Henson convinced British media impresario Lew Grade to finance the venture, and The Muppet Show aired its first episode on September 13, 1976. The show introduced the characters of Miss Piggy, Gonzo, and Fozzie Bear, and gave Kermit the role of the host. Kermit has been seen as Henson’s alter-ego, much as Mickey Mouse has been seen as the alter-ego of Walt Disney.

In 1979, Henson made his foray into feature films with The Muppet Movie, which was a success both critically and financially. The film was followed with The Great Muppet Caper. After the success of the latter film, The Muppet Show was brought to an end so Henson could focus on more feature films, which included The Dark Crystal, The Muppets Take Manhattan, and Labyrinth. In 1989, Henson entered into negotiations with the Walt Disney Company to handle the business side of the Muppets while he spent more time on the creative side. Several projects were completed at this time, including a television special, The Muppets at Walt Disney World, and a Walt Disney World attraction called Jim Henson’s Muppet*Vision 3D (a still present and popular attraction) [See August 28th entry for more information]. Unfortunately, Henson died before the deal was completed (a new deal would be reached in 2004).