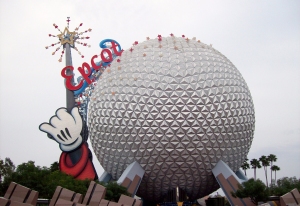 “We think the timing of the removal is right.”

On July 5, 2007, Epcot’s Vice President Jim MacPhee announced that the Epcot letting, Mickey Mouse arm, and wand attached to the Spaceship Earth attraction would be removed, with the removal date to be before October 1st. The removal of the structure coincided with the park’s 25th anniversary, with Spaceship Earth itself once again becoming the sole icon of the park. The arm holding the wand was, at the time, the tallest structure in all of Walt Disney World, at a height of 257 feet.