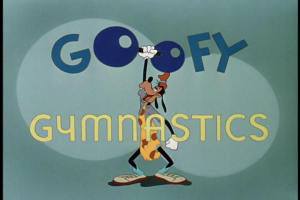 “Don’t be a spineless weak-kneed no good nincompoop!”

On September 23, 1949, the Goofy short film Goofy Gymnastics premiered in theaters. A segment of this short was featured in the film Who Framed Roger Rabbit. It was directed by Jack Kinney, with story by Dick Kinney.

The short begins with Goofy home from a day of work, exhausted. As he leafs through a magazine, he finds an advertisement for a workout program that promises fame, money, and fortune. He sends away for a home gym kit, and he quickly sets it up when it arrives. He starts with the barbell exercises first, but is unable to lift the weight and ends up hurting himself. When he finally is able to lift the barbell, a fly lands on him and sends him crashing through the floors of his building. He sets out to start the second exercise: chin-ups. He is able to do them, until it is revealed that he is moving the bar to meet his chin rather than the other way around. Goofy then moves on to the cable expanders, while ominous music plays in the background. He gets caught in the cables, which sends him flying around the room and destroying the equipment in the process. In the end, Goofy is tired to the point where he just falls asleep.