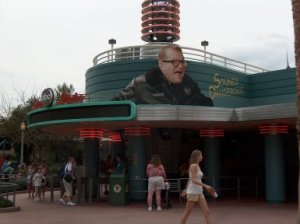 “You will hear from us soon!”

On April 22, 1999, the audio sound effects show Sounds Dangerous opened in the ABC Sound Studio, located in Walt Disney World’s Hollywood Studios. The show was hosted by comedian Drew Carey, best known for ABC’s The Drew Carey Show and Whose Line is it Anyway?, playing the part of an undercover detective named Foster. Guests were given headphones and told they would be participating in a test pilot for a new show called Undercover Live. The attraction was altered in 2009, when it was told it would operate seasonally. On May 18, 2012, the attraction was officially closed; the space has since been used to show previews of new Disney films.