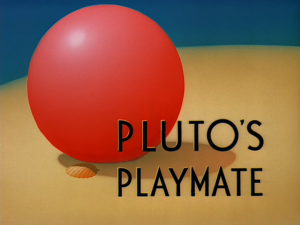 On January 24, 1941, the Pluto short film Pluto’s Playmate was released to theaters. It was directed by Norm Ferguson.

It’s a perfect day at the beach for Pluto as he races across the sand chasing a ball. The ball lands in the water, and as he goes after it, the ball seemingly moves on its own, avoiding Pluto’s teeth. As Pluto searches for the ball, a wave sweeps him across the shore, revealing that the ball has been taken by a playful seal. The seal wishes to play with Pluto, but Pluto is suspicious of the strange creature. Pluto tries to take the ball from the seal, but ends up burying holes in the sand in his pursuit. Pluto finally gets his ball back and tries to bury it in the sand away from the seal, but the seal sneaks under Pluto and takes the ball away again. The seal throws the ball for Pluto, and once Pluto retrieves it, he buries it in a hole several feet deep. The seal dives in to retrieve it, and Pluto sees this as his chance to bury the seal along with the ball. However, when a wave comes in, the seal pops out of the water, unable to be trapped by Pluto’s antics.

The seal plays with Pluto’s ball while swimming around, which infuriates Pluto

The seal plays happily in the water with Pluto’s ball, infuriating the dog. Pluto decides to take a sneak attack approach and creeps through the water to catch the seal. As he travels through some seaweed, he unknowingly picks up an octopus, who traps Pluto to the edge of a barrel. Before Pluto can bark at the octopus, the octopus uses its legs to keep Pluto’s mouth closed. The octopus traps Pluto under the water, and Pluto struggles to get free. The seal sees Pluto struggling, and works to free Pluto from the clutches of the octopus through tug-of-war method. The seal wins, and he and Pluto are swept to shore by another wave. Pluto seems to have stopped breathing, and the seal quickly revives him. The seal returns to ball to Pluto, and the grateful dog plays ball with the seal up and down the beach.