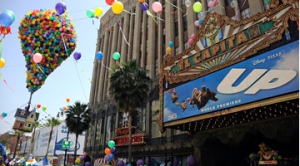 “My favorite part of the film is the wonderful montage of just showing a life from early to late, and without words, and I’m really proud of us for doing that sequence.” – Bob Peterson, voice of Dug

On May 16, 2009, the Disney/Pixar film Up had its world premiere at the El Capitan Theatre in Los Angeles, California. Many celebrities were on hand for the celebration, including Jon Voight, Barbara Eden, and several Disney Channel stars. Hollywood Boulevard was cleared for the decorations, which included thousands of balloons, street performers, and an appearance by Carl, Russell, and Dug themselves. The film would go on to have a general release on May 29, 2009.

Posted in Uncategorized and tagged 2000s, Animation, Feature Film, Pixar, Premiere. Bookmark the permalink.
← May 15
May 17 →